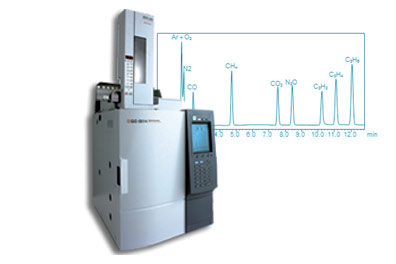 Ideal for routine analysis in the R&D lab or industrial setting, the GC-2014 utilizes the high-end technology of the GC-2010 Plus to cover a wide range of applications from capillary to packed column analysis. The large GC oven will accommodate up to 4 detectors and 2 injection ports. Given its ability to be optimized for packed columns, it is the perfect platform for the SystemGC program.

Performance lifted to a higher level

The GC-2014 Series is equipped with the advanced flow controller (AFC) technology inherited from the GC-17A Series and GC-2010 Series. This digital control is standard for not only capillary columns, but packed columns as well. Accurate flow rate control via AFC has higher-level repeatability of retention time and peak area, enabling a higher level of analyses. The detectors have been completely redesigned, incorporating the GC-2010 detector designs for capillary analyses and the GC-14 detector designs for packed columns. This TCD-2014 unit is ideal for packed column measurements employing the semi-diffusion cell design used in TCD-14. The newly designed FPD-2014 takes advantage of the holophotal construction of the FPD-2010.

Expandability to Support all Types of Analysis

Column replacement is easier in large column oven. Select from four types of injection units and five types of detectors according to the target compounds and analysis objective. Modular injection units, detectors and auto-injectors can be easily added after installing the unit in your lab. Three Injection Units and Four Detectors can be simultaneously installed. Effective use of valuable column resources is maintained by using the 40-mm pitch glass column the same as Shimadzu GC-7, 9, 12, 14, 15 and 16 Series.

A Full Line of Injection Units and Compact, High-Sensitivity Detectors

Single Packed Injection Unit
SINJ-2014
This is a specialized sample injection unit for use with ECD or other high sensitivity detectors.