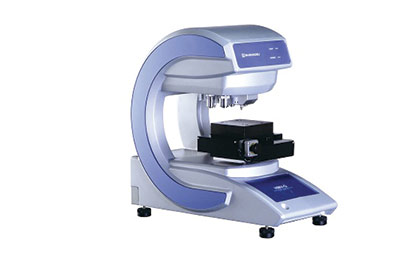 Shimadzu’s HMV-G series of Micro Hardness Testers determine hardness by indenting a material and then measuring the size of the resulting indentation. Systems range from standalone hardness testing models with manual stage movement and indentation reading through an optical microscope to fully automated hardness testers with programmable movement and automatic reading by analysis of images from a built-in CCD camera.

Supports Vickers, Knoop, Brinell, and Triangular Pyramid Indentation Harndess Testing
A Vickers indenter is supplied as standard and a second optional Knoop, Brinell, or 115° triangular pyramid indenter can be added.

G-Shaped Design with Increased Workspace
All HMV-G hardness testers feature a G-shaped design for increased workspace and improved operability. The G-shaped frame is also designed to disperse test loads uniformly and the back of the frame is open, enabling hardness testing of long and narrow samples.

Straightforward Hardness Testing with the HMV-G20 Series
The HMV-G20 series includes a simple test mode for quick testing, where only the test force and indentation duration time need to be set, an easy-to-use LCD touch panel, which displays test condition settings and plots statistical graphs, and direct USB transfers, where data is automatically saved onto a USB memory stick in CSV format.

Fully Automated Pattern Testing in a Fraction of the Time with the HMV-G-FA Series
In addition to features of the HMV-G21 series, the HMV-G-FA hardness testers incorporate:

Quick Order
Compare Products
Compare
Clear All
You have no items to compare.
Need a quote for our lab instruments or supplies?