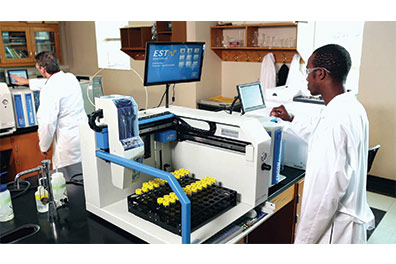 The Evolution Purge and Trap Concentrator was designed from the beginning with the user in mind. The system needed to provide high productivity, stability, reliability and fast maintenance to meet the needs of today’s laboratory for the concentration of volatile organic compounds (VOCs).

As detection limits have been pushed lower, and Mass Spectrometer systems more sensitive, moisture control is key to the overall stability of the complete system. Other systems collect the analytes and water on the analytical trap, then, during desorb, the sample flows through a moisture removal system on the way to the GC. When evaluating these systems, one problem quickly became apparent: if you are going to remove moisture during the desorption step when your flow is controlled by the GC, the effectiveness of this design will be determined by many different factors.

EPA methods require you to purge between 40-50mL/min of flow. As you purge, the water and VOCs travel through a Moisture Reduction Trap (MoRT) on the way to the analytical trap. This prevents a large amount of moisture from contacing the analytical trap. By using an 8-port valve instead of a 6-port valve, the sample during desorption goes directly to the GC. In other systems the sample flows through a moisture system during this step. This creates a lot of extra volume in the desorption pathway, allowing peaks to broaden, sacrificing peak resolution.

EST Analytical patented a process on the Evolution where there are two flows that go through the system during bake; one flow is directed across the trap and another separate flow goes through the glassware. Other systems actually have the bake flow travel through the trap then through the cold glassware, depositing heavy compounds on the cold glassware surface to be seen on subsequent runs. By separating the flows, the Evolution avoids this problem and by heating the sparger vessel (optional) up to 125°C during the bake sequence, carryover is reduced dramatically.

The Evolution comes standard with a 25cm touchscreen display. As laboratory networks have grown, there is a tendency to have the PC controlling the system further away from the actual instrument. By allowing the user to have control at the instrument, changes and troubleshooting are easier and faster to perform.