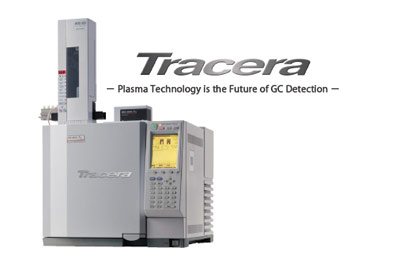 Plasma Technology is the Future of GC Detection

The new Tracera GC System is ready to solve your trace analysis needs. This system utilizes the new Barrier Discharge Ionization Detector technology coupled with a GC-2010 Plus capillary gas chromatograph to create a GC system that makes it possible to reveal trace components that are difficult to see by other GC detectors.

High-Sensitivity Analysis of Permanent Gases and Light Hydrocarbons
Conventional analytical techniques require a system configuration with multiple detection schemes to analyze for permanent gases and light hydrocarbons. The use of a methanizer and FID is often required to detect ppm levels of CO and CO2. However, the BID replaces all of this hardware and allows for the highly sensitive detection of mixtures of inorganic gases and light hydrocarbons.

Comparison of Detectable Concentration Ranges
The detectable concentration ranges are guidelines only. They differ according to the compound structure, analysis conditions, and the GC instrument.

Sensitivity Comparison Between BID and FID
FID is a great choice for hydrocarbons due to its selectivity for the C-H bond. However, it exhibits a poor response to compounds with other functional groups such as: carbonyl, carboxyl, the hydroxyl group (-OH), aldehydes, or halogens. In contrast, the BID achieves superior sensitivity for such compounds, with less variation in relative response.

Handles High Boiling Point Components
With a maximum operating temperature of 350℃, the BID is capable of analyzing for compounds up to n-C44.

Long-Term Stability with New Discharge Design
The architecture of the BID was designed such that the plasma generation zone is maintained at near room temperature. The electrodes are positioned where they do not contact directly with the plasma. This robust design requires no routine maintenance or consumables.

Evaluation of Long-Term Stability
A sensitivity fluctuation test was performed for operation times of 96, 2,688, and 3,240 hours. When relative intensities of 2,688 and 3,240 hours vs. peak intensity at 96 hours are calculated, the difference was negligible.

Repeatability of Trace Gas Analysis
A series of sample loop analyses was performed at 5 ppm concentration of each component. The calculated area repeatability showed RSD% of 0.84 – 1.80.

A Single System For A Variety Of Applications

The Tracera GC system is based on the GC-2010 Plus platform and includes a Barrier Discharge Ionization Detector. Making it a nearly universal Gas Chromatography tool.

Analysis of Reaction Products in Artificial Photosynthesis Research
Artificial photosynthesis is a technique to capture energy from the sun and store it chemically. It is expected to become the 4th renewable energy source along with photovoltaic, solar thermal, and biomass. Shown below is a result of simultaneous analysis of CO and H2, which are generated in a photochemical-carbon dioxide reduction reaction.

The production amount of CO is rapidly increased, then slows as the reaction nears completion.
The Tracera GC system allows simultaneous, high-sensitivity measurement of CO and H2 using a single detector and carrier gas.

Analysis of Impurities in Ethylene
Ethylene is an important chemical used as a starting material in the production of many polymers. The purity of ethylene feedstock is essential to know. Below is an example of the analysis of impurities in ethylene.

The decay gas is extracted from a lithium ion battery, diluted, then introduced into the gas chromatograph.
The Tracera GC system allows simultaneous, high-sensitivity measurement of the lithium ion decay gases using a single detector and carrier gas.